What's in your garden?

It’s been quite a spring for gardens and lawns. All that rain and cool weather, and now sun and warmth. I don’t know about you but at our house June is busting out all over. Everything is green and lush, including the weeds. I’ve heard weeds described as wildflowers with poor public relations. But a weed can be something, anything growing where you don’t want it to grow. We’ve got a bumper crop of tender young maple trees springing up hither and yon. Because of the local mushroom farms right up the road and strong winds, spores have taken root and sprouted in the lawn and in the spaces between the wooden walls surrounding raised beds. A couple of weeping cherry trees were overtaking some smaller growth. We’ve got blackberry bushes growing in with the strawberry plants. “Dogs and cats living together, mass hysteria!” 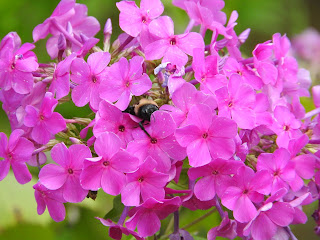 Truth be told, I find it overwhelming, and yet thank goodness David is the farmer and gardener because he takes it all in stride. After all, we cannot control where every seed gets planted. We cannot nor should we tame, try to control all the wildness, how Nature is constantly scattering her energy to and fro. Blackberry bushes mean there will be blackberries to be harvested at some point. Trees can be moved when they get too big for their space, and more trees are a good thing. And one of the so-called weeds growing in the front garden has a beautiful bright pink-purple flower, perhaps some wild phlox.

Jesus described the kingdom of God, the Beloved Community, the kin-dom of God like a mustard plant, like a weed that is allowed to grow until it becomes big enough for birds to nest in. Such hyperbole! Jesus’s listeners were probably horrified to hear that what would save them was something they would trample underfoot. But then they knew what that felt like from the Romans. Jesus uses the mustard plant as a contrast to the cedar tree, which was prized for its strength, as it was the backbone of many an empire’s economy. King Solomon built the First Temple from cedar.

But instead of an empire built on an economy of might and control, bigger and better, Jesus describes God’s kingdom as seeds that are scattered and grow untamed, unfettered, unbounded. Jesus imagines God’s dwelling place, the saving grace of God’s people, the justice that will restore righteousness, right living, as a scrappy shrubbery that most of us would yank out of our gardens and put in our yard waste containers. 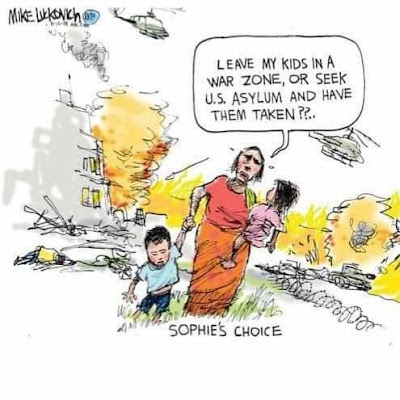 Too often throughout human history dominant cultures, empires have dealt with whole peoples as though they were weeds to be uprooted and moved or destroyed. And every time it has ended in death and disaster. No matter what your stance may be on immigration or on undocumented immigrants, the United States is acting toward immigrant families and their children, toward those escaping violence, seeking asylum and a better life as though they are weeds to be controlled. As children are taken from their parents and placed in government detention or foster care facilities, we are sowing the seeds of trauma, mental illness, PTSD, learning disorders, and brain dysfunction. The United Nations has called for an end to these separations. 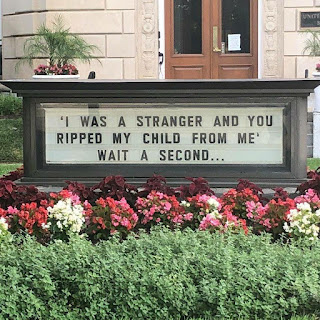 Attorney Jeff Sessions, in an infamous attempt to defend this policy, cited a passage from the 13th chapter of Paul’s letter to the Romans, which states that everyone is subject to the governing authorities, that there is no authority apart from God, and those authorities exist being instituted by God. This very same scripture was used to enshrine slavery, defend the Holocaust, and preserve apartheid in South Africa. If we had followed this scripture throughout our nation’s history, there would’ve been no American revolution (or any revolution for that matter), no women’s suffrage movement, no Civil Rights movement, no Stonewall riot, no Black Lives Matter.

In fact, if he had read a few more verses into chapter 13 he would’ve found these words: “Owe no one anything, except to love one another; for the one who loves another has fulfilled the law. The commandments, ‘You shall not commit adultery; You shall not murder; You shall not steal; You shall not covet’; and any other commandment, are summed up in this word, ‘Love your neighbor as yourself.’ Love does no wrong to a neighbor; therefore, love is the fulfilling of the law.”

If you really want to get into it, Isaiah puts it this way:

“Woe to those who make unjust laws,
to those who issue oppressive decrees,
to deprive the poor of their rights
and withhold justice from the oppressed of my people,
making widows their prey
and robbing the fatherless.
What will you do on the day of reckoning,
when disaster comes from afar?
To whom will you run for help?
Where will you leave your riches?
Nothing will remain but to cringe among the captives
or fall among the slain.” (Isaiah 10: 1-4a, NIV)

Or from the book of Exodus:

“You must not oppress foreigners. You know what it’s like to be a foreigner, for you yourselves were once foreigners in the land of Egypt” (Exodus 23:9) and “The same law applies both to the native-born and to the foreigner residing among you” (Exodus 12:49)

Or the oft-abused Leviticus: 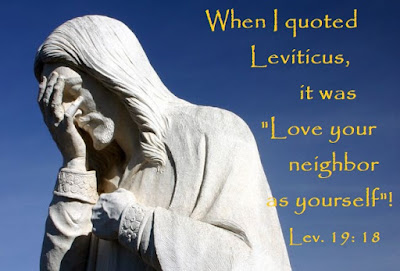 I could prooftext ad nauseum like everybody else. But the Bible was never intended to be used, as it is today, as a bludgeon to silence an argument or to correct other people’s behavior or to control them or to establish one particular theology over all others. It was intended to scatter, to plant, to nurture the seeds of hope and compassion, seeds of grace and justice, seeds of unconditional, undeserved, and unlimited love. 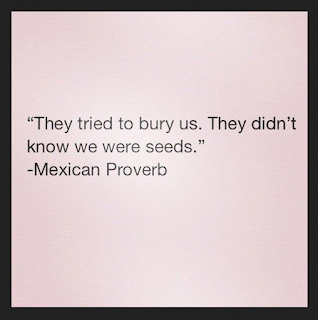 Perhaps we can learn from a Mexican proverb from the Zapatista revolution in 1994 against the NAFTA agreement: “Quisieron enterrarnos, pero se les olvido que somos semillas.” “They tried to bury us. They didn’t know we were seeds.” Funny thing is, this proverb originated not in Mexico but in 1970’s Greece by gay poet Dinos Christianopoulos who was persecuted for being true to himself: “What didn’t you do to bury me, but you forgot that I was a seed.”

Though the way ahead is unknown and uncertain, even in the midst of despair, there is nothing to stop us from scattering our own seeds of hope and compassion. We don’t need a church building or an institution or organized religion to embody what Jesus calls us to be and do. We’re not called to be the mighty established cedar but the scrappy, persistent shrubbery from a mustard seed. We’re called to not only scatter seeds but to be seeds, allow ourselves and our lives and our life together to crack open, release all that energy and potential, to grow we know not how sometimes, uninhibited, right where we are planted, and to bloom with unabashed grace.

For each of us, every single one of us—especially the least of us—and all of us together, we are intended to be God’s dwelling place, the saving grace for all people—you are mine, I am yours, we are ours—the justice that will restore right living.

What’s in your garden? Amen. 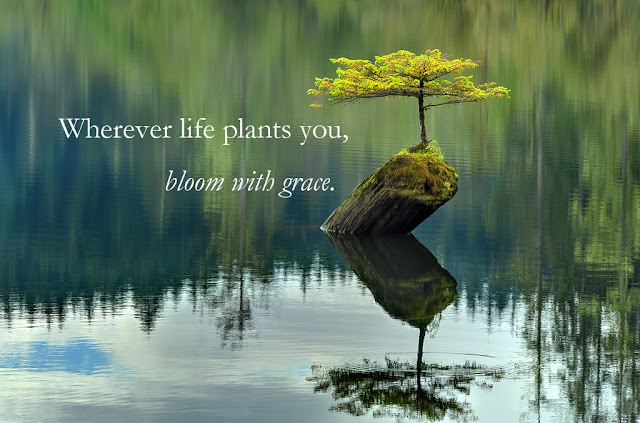 "So let us not grow weary in doing what is right, for we will reap at harvest time if we do not give up." (NRSV Galatians 6:9)

Let us not grow weary in scattering seeds of hope and compassion.

Let us not grow weary of being that scrappy, persistent shrubbery of the Beloved Community of God.

Let us not grow weary of being Church but rather unleash it upon a weary world that aches for justice and yearns for peace.

Posted by Cynthia at 9:25 AM No comments: 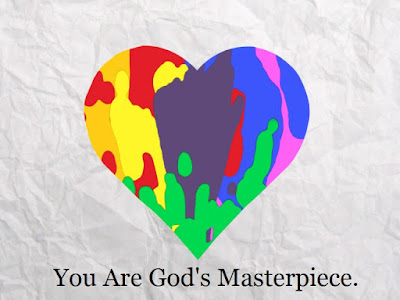 You like to dance and twirl whenever you hear music.  Your smile is contagious and your laughter is like a song.  You think big thoughts.

You love to draw and build things. You watch what’s going on around you, paying attention to people and what they’re saying and doing.

Your eyes can get as big as saucers.  You love to explore, ask questions, show what you know, get your hands on everything.

You know how to express yourself and make yourself heard.  You are so independent; no one can tell you who you are. 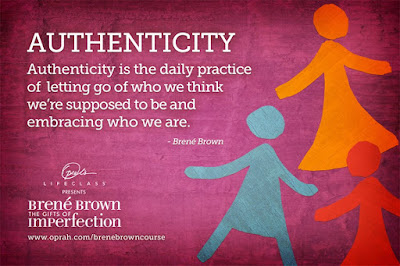 You sometimes act like you’re not a part of things, but maybe that’s because you want to be the leader, go in a different direction, show just how smart you are.

You’re kind and friendly and full of energy.  You take your time to think about stuff.

You’re funny and strong and creative and smart.  You care deeply.

You’re always thinking.  You ponder the big questions but you’re also in the moment yet sometimes in your own world and so wide open to the one around you. 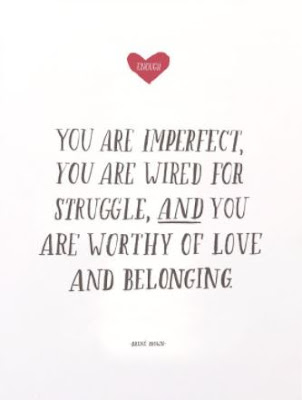 You stand out in a crowd, even though sometimes you’re petrified to be in front of one.

You’re earnest and smart, and you like to be helpful and make people laugh.

You’re not sure where you belong sometimes, but you’re willing to give people a chance, which one day you will realize is a tremendous gift. 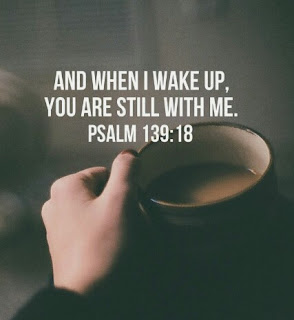 You are as loyal as the day is long.  You would do anything for those you love and who love you.

You’re playful and imaginative and yet you want to be taken seriously.  You know how to keep someone company by just sitting next to them or sharing a good laugh.

You’re a good friend to everyone you know.  You’re silly and smart and kind. 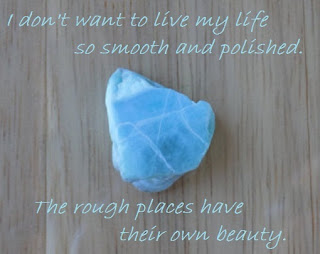 You’re anxious and scared and worried.  You’re sad and overwhelmed and tired and angry.  You’re disorganized, some days, a real mess.  You try to hide the mess.  You procrastinate.  Your to-do list runs your life.  You thrive on busy.  You long for a rest.  You can’t get out of bed some days.  You struggle with burnout.  Sometimes you lose your patience, lose your temper, lose your way.  You forget to cry, to laugh.  You think you know the answers.  You think you know nothing.  You hang onto a lot of stuff you don’t need.  You want to pull back, run away.  You want to belong.  You make mistakes.  You’re afraid you’ll disappoint others.  You wonder what’s the meaning of all this, why are you here, what will the future be like.  You want your life to mean something, to make a difference. 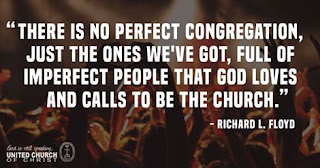 You’re beautiful and generous and forgiving and kind. You’re brave. You never give up, and you’re working on when to let go.  You have healthy doubts.  You have faith in what’s good and holy and true.  You make sacrifices.  You ask questions.  You hunger and thirst for justice.  You love this world and you do what you can to love others.

You are my masterpiece.  Just the way you are.  Love yourself.  Because I wouldn’t change a thing.

Posted by Cynthia at 1:56 PM No comments:

Cynthia
That's me in Godspell a few years back. At the beginning of my ministry I was an Associate Pastor in Dayton, OH, not knowing how marriage and children would change my life and my call. I was an interim pastor, supply preacher, and stay-home mom with 2 children for 16 years. I am now the settled pastor at the New Ark United Church of Christ in Newark, DE.

Give to New Ark UCC

COPYRIGHT
© Cynthia E. Robinson, 2005-2020. Unauthorized use and/or duplication of this material without express and written permission from this blog’s author and/or owner is strictly prohibited. Excerpts and links may be used, provided that full and clear credit is given to Cynthia E. Robinson with appropriate and specific direction to the original content.